Here's how to ensure a happy and lucky New Year.

New Year's Eve is one of the few occasions that almost everyone in the world celebrates—but in terms of how people honor this passage of time, all the traditions couldn't be more different from each other.

Here are some of the most fascinating from around the world. 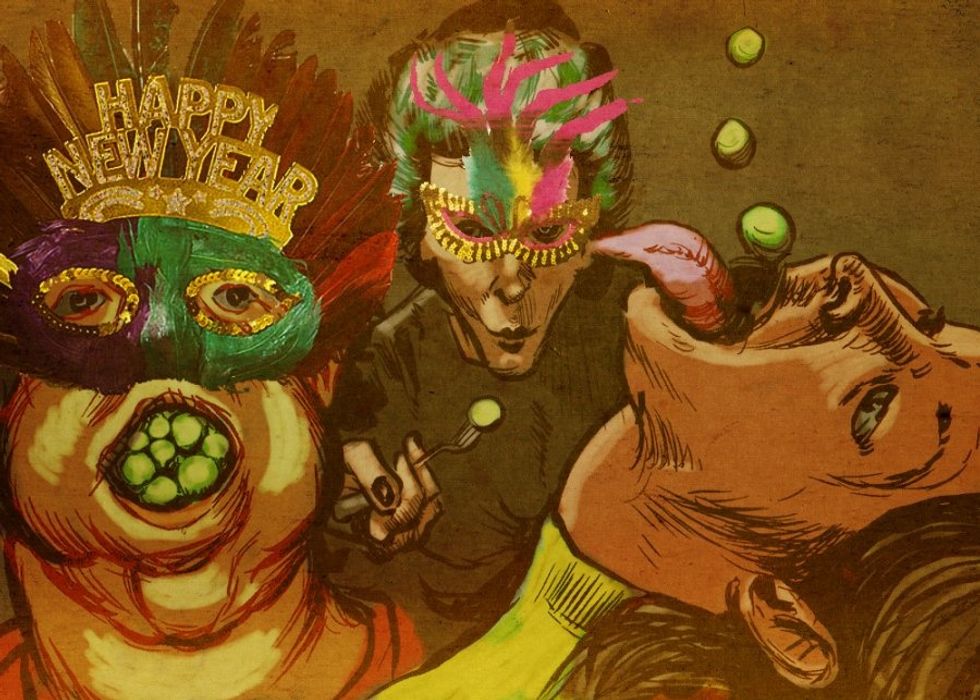 This tradition stems from the 1800s, when vine growers in the Alicante region of Spain came up with this tradition as a clever marketing technique to sell more grapes. Now, all across Spain, many people will eat twelve grapes as the clock strikes midnight on New Years' Eve. 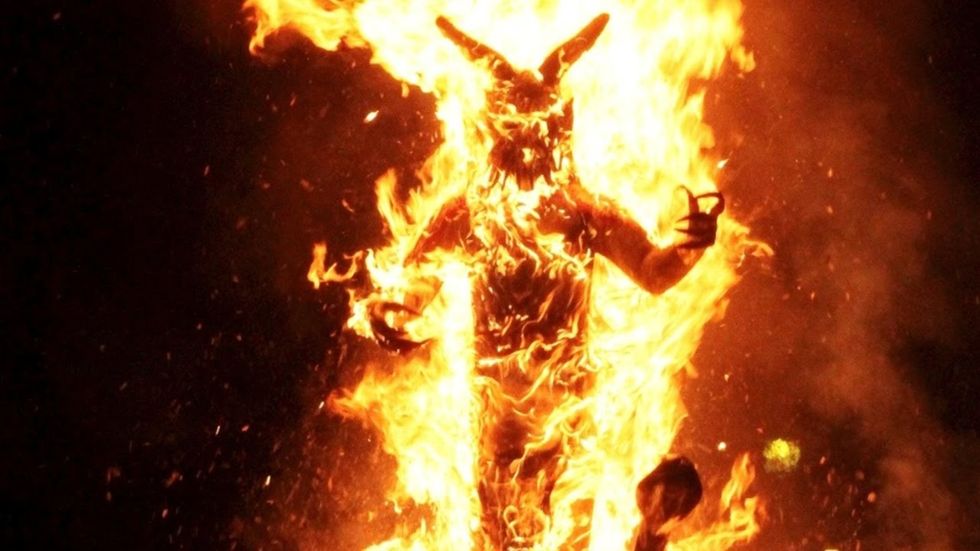 Fire is a constant tradition around the world on New Years' Eve—Iceland has its bonfires and Scotland has a festival of fireballs meant to ward off evil spirits—but in Ecuador, people will often build scarecrow dolls modeled after politicians, pop stars, and other public figures and promptly set them ablaze.

This is meant to cleanse out the old and invite in the new, though it may have originated during an epidemic of Yellow Fever in the 1700s, when burning away the clothes of the dead was thought to improve chances of survival for the living. 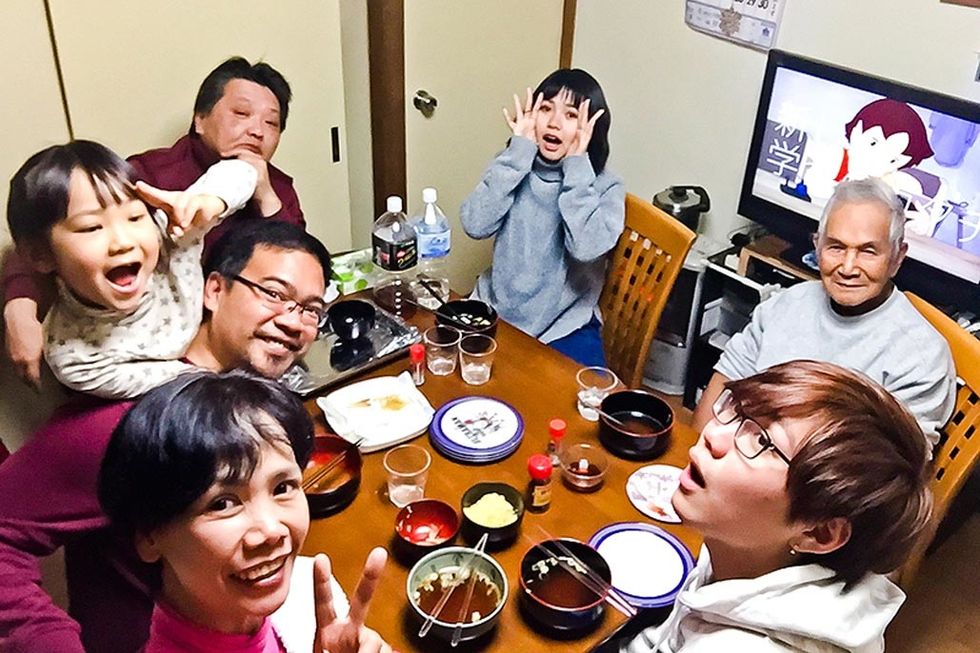 Buddhists and Shintoists in Japan will also often practice a tradition of ringing 108 bells at the onset of each new year. According to tradition, each ring is meant to symbolize a worldly desire or sin, and by the time they've all been rung out, a new year and fresh, clean slate will have begun. 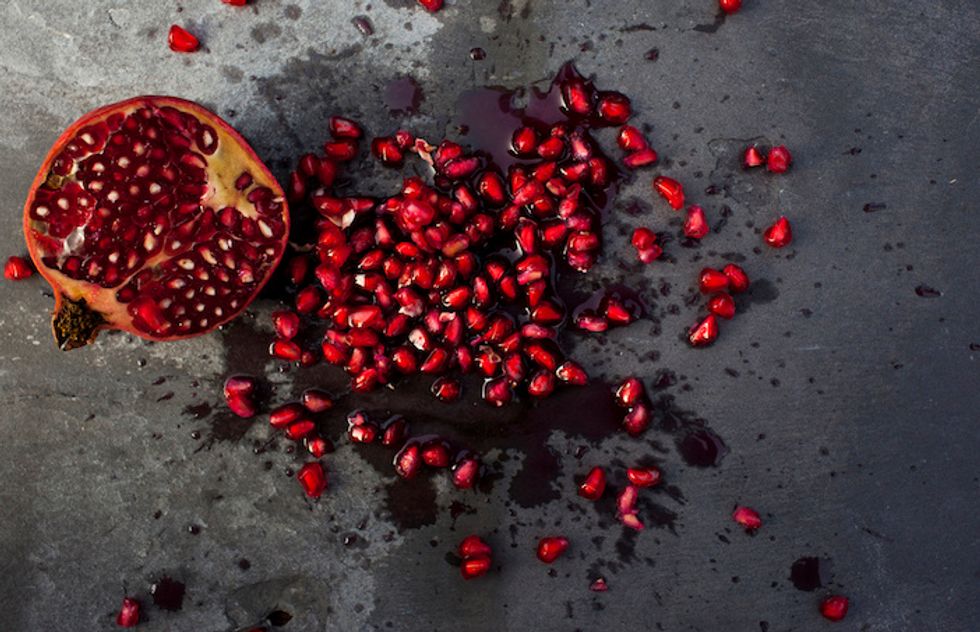 In Greek mythology, the pomegranate is associated with good luck—so therefore in Greece, many locals spend their New Year's Eves throwing pomegranates against their door, smashing the fruit and counting the seeds that scatter after the impact. Each seed is said to represent a bit of luck to be had in the coming year. 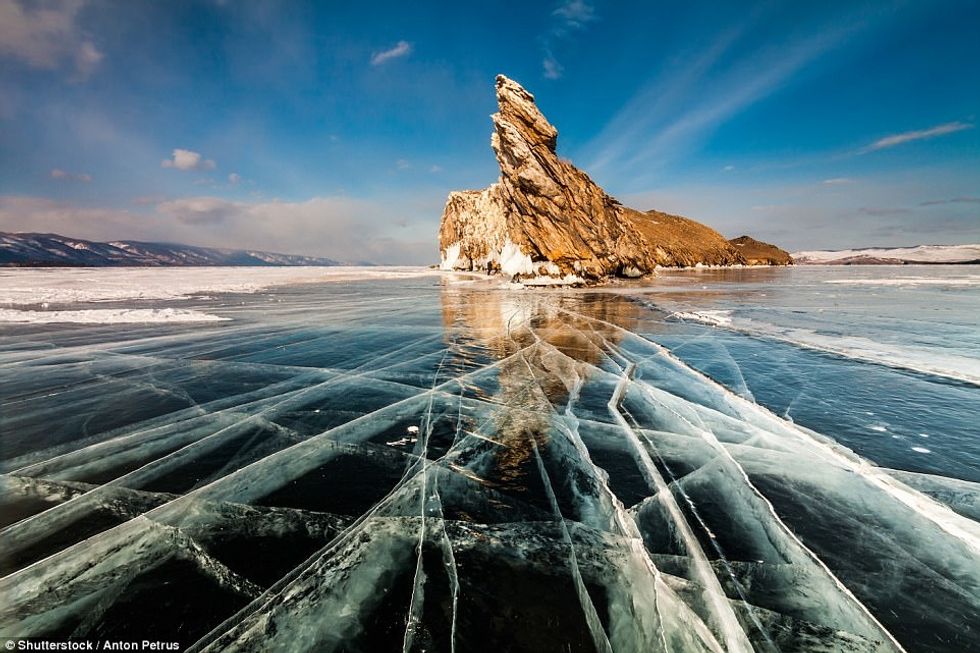 In Russia, many locals will write down their New Year's Eve resolutions, and then will burn them and sprinkle the ashes in champagne. It's a way of honoring and internalizing hopes for the New Year while also accepting their ephemerality and the way time can sweep across promises like fire.

In Siberia, things get even more poetic. Each year, divers brave the plunge and plant a tree—entitled a yolka, or New Years' tree—at the bottom of icy rivers and lakes. This is meant to symbolize the coming of Father Frost and the possibility of starting over in the new year. 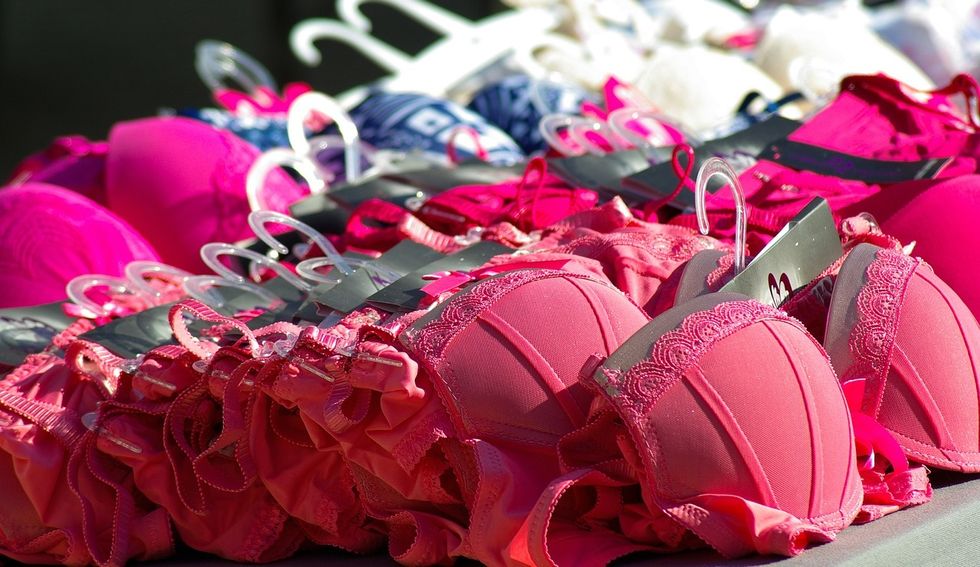 In Mexico and many Latin American countries, celebrators wear red underwear in order to find love. Red underwear is also a popular New Year's tradition in Italy, Turkey, and all across the world, so this is an easy way to join up with a bunch of other people trying to get lucky (literally and/or figuratively) this New Year's.

If you're not feeling the passion, some people wear yellow or gold for wealth, green for well-being and health, or white underwear for peace.

7. Brazil: Flowers in the Sea 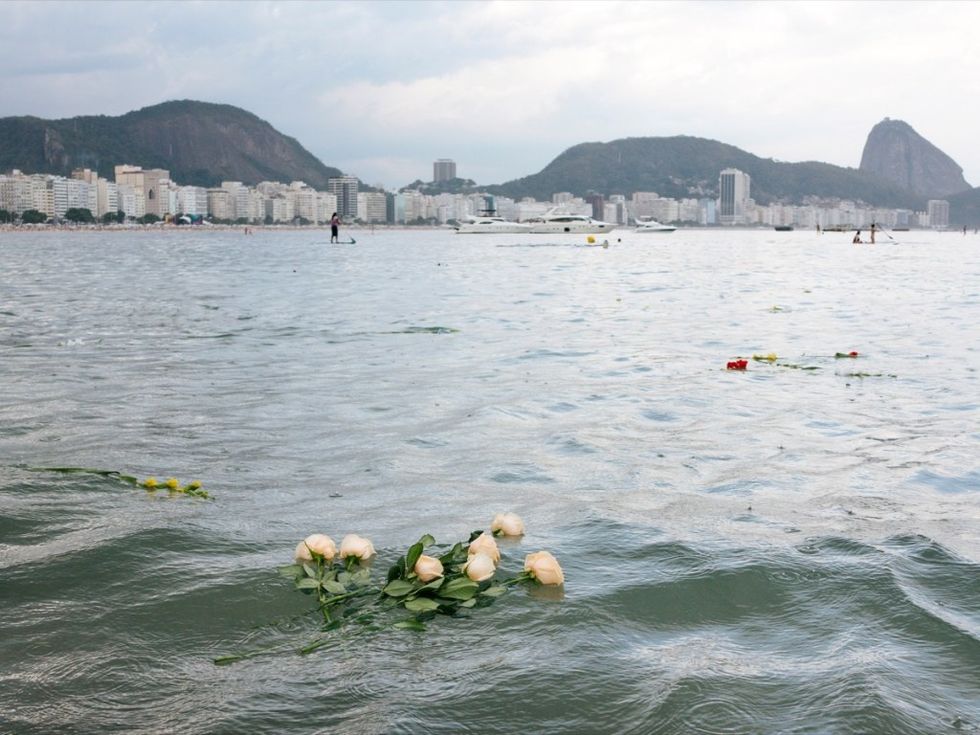 On New Year's Eve, many Brazilians honor the water goddess Yemoja by throwing white flowers and candles into the ocean. This offering is said to appease the deity, who controls the ebb and flow of the tides. 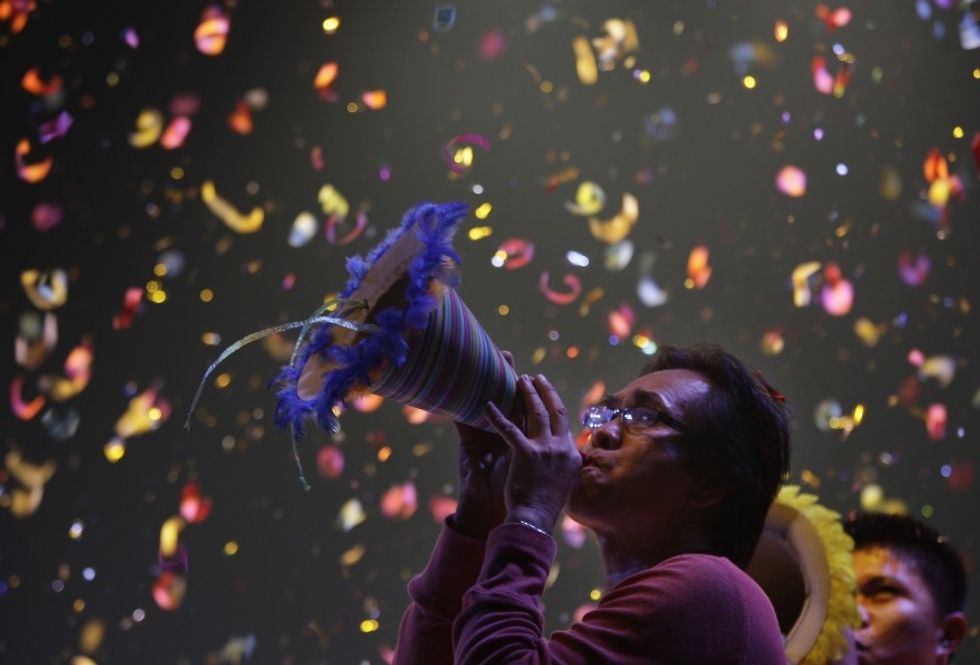 In the Philippines, people often wear and display circular things like polka dots and round fruits in order to evoke the shapes of coins. This tradition is meant to invite wealth in the new year. 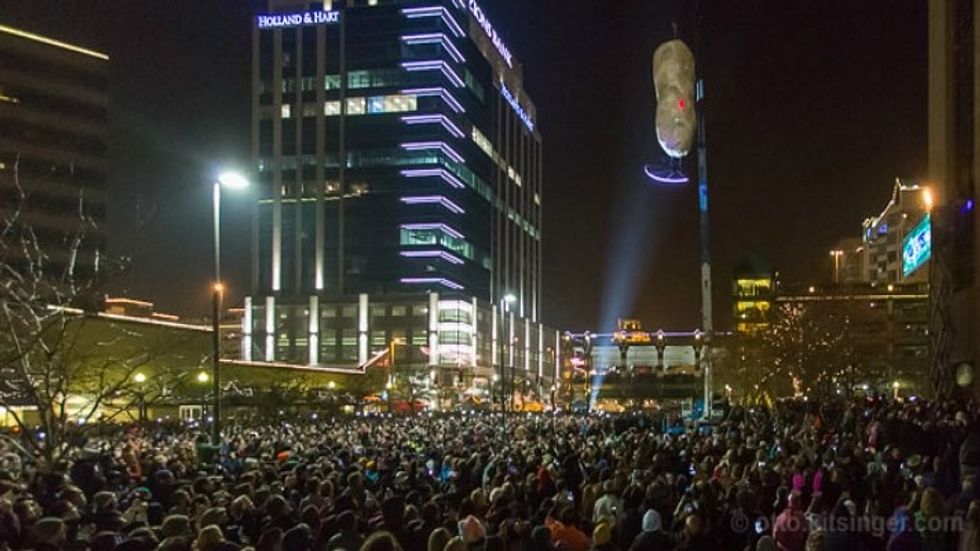 The US has Times Square's Ball Drop, but each year, 40,000 people gather in Boise, Idaho to watch something much, much better: the Potato Drop. That's right: Each year, Boise inhabitants watch as a gigantic, 400-pound, glowing spud falls from the sky.

In general, Americans love dropping things on New Year's Eve. There's also a key lime wedge drop in the Florida Keys, a pinecone drop in Arizona, a PEEPS chick drop in Pennsylvania, and many more. 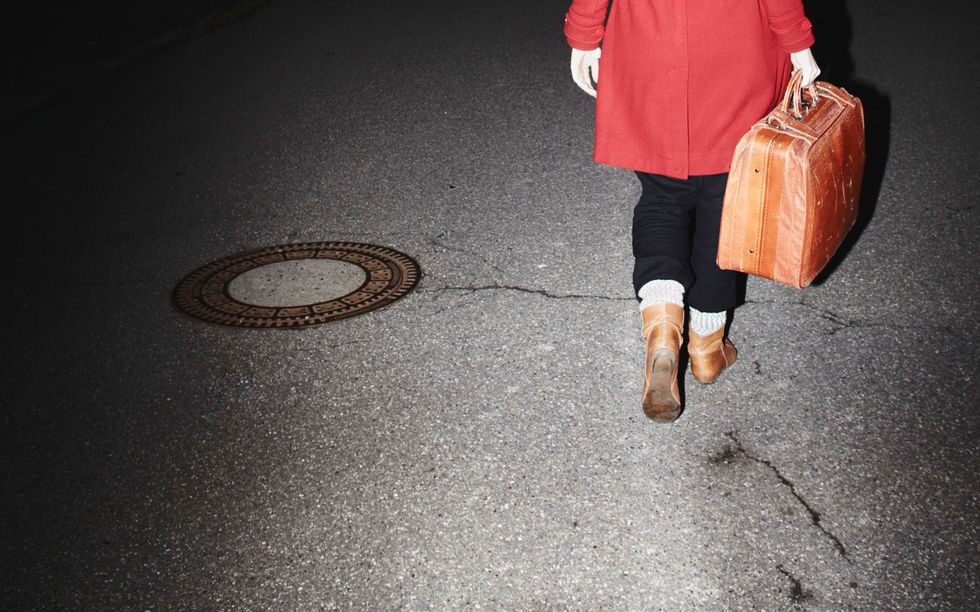 Looking to make 2020 your most travel-filled year yet? You might want to try a tradition practiced in Colombia, where hopeful New Year's partiers will carry an empty suitcase around the block. This is believed to invite lots of travel and adventure into one's future.

Whatever you choose to do, those of us at Journiest wish you a happy and lucky New Year's Eve and a very magical and abundant 2020.