The World's Fairs were all things—beautiful, obscene, capitalist, futuristic—and now all we have are the photographs and the memories.

In 1851, London hosted the first major world's fair. Titled The Great Exhibition of the Works of Industry of All Nations, the fair featured industrial achievements from various nations around the world. Hosted in London's opulent custom-made Crystal Palace, it featured a glittering array of new technologies, from an early fax machine to a telescope to the world's largest diamond.

This world's fair project was, in a way, an early triumph of liberalism. Its success promised (among other things) that free trade and capitalism would not only save us—they'd launch us into a brave new future. In addition to highlighting great inventions that promised to elevate humanity to new heights, the 1851 world's fair promised that nations could cooperate on the basis of shared human ambition instead of tearing each other apart.

Around 100 world's fairs and two world wars later, we've landed in the era of neoliberalism, the Internet, and climate change (the end result of cutthroat capitalism). The world's fairs have become world expos, and their scale has been compressed alongside technology itself.

But once upon a time, the world's fairs were glorious and highly dangerous occasions. Today, they are both relics and omens that can teach us about the mistakes of the industrial revolution while also embodying the beauty of human creativity.

After the great success of London's fair, the world saw an explosion of fairs. Between 1880 and the start of World War I, over 40 fairs took place in nations around the world, including Australia, Guatemala, and Hanoi (which was located in then-Indochina, now Vietnam).

Postcard from the Hanoi Exposition Wikipedia

The United States' first world's fair was actually not a notable success. It took place in 1853, in New York City's Bryant Park. It featured its own Crystal Palace and included displays like those featured in London, as well as a new sculpture collection. Walt Whitman wrote a poem about the event, titled "Song of the Exposition":

"... a Palace,
Lofter, fairer, ampler than any yet,
Earth's modern wonder, History's Seven out stripping,
High rising tier on tier, with glass and iron facades,
Gladdening the sun and sky - enhued in the cheerfulest hues,
Bronze, lilac, robin's-egg, marine and crimson
Over whose golden roof shall flaunt, beneath thy banner, Freedom."

Still, the US's first World's Fair ended up losing money. The Crystal Palace burned in 1858, and the US wouldn't host another fair for 20 years. Today, the Palace is remembered fondly by some, though The New York Timescalled it a "fleeting monument to conspicuous consumption"—something that could perhaps be said of all world's fairs.

1855's Paris world's fair was more successful than its New York counterpart. Though it also lost money, it had such a positive influence in France that Paris would hold four subsequent world's fairs in 1867, 1878, 1889, and 1900.

The 1855 event saw the unveiling of some fascinating inventions, including the Loysel percolator, which could make 2,000 cups of coffee per hour. The washing machine and the Colt six-shooter revolver both debuted. It was boom-town for product-sellers.

The 1889 fair would also see the installment of Paris's most iconic attractions—the Eiffel Tower.

Views from the Eiffel Tower in 1889Atlas Obscura

The Interior of the Grand Palace in 1889Brown University Libraries

By 1900, industries across the world had exploded, and the Paris fairs were unveiling the latest money-making attraction: spectacular talking films that combined image and recorded sound to create the experience we now call "the movies."

The Grand Palais at the 1900 Paris World's FairBrown University Library

By 1893, New York City was back in the World's Fair game. Known as the World's Columbian Exposition, the US's first truly great fair was a celebration of the 400th anniversary of Christopher Columbus's violent takeover of what would become America.

The Columbian Exposition occurred 28 years after the American Civil War, and as usual, the nation was trying to cover its bloodstains with crystals and lights, attempting to unify by rallying around industry. It was the Gilded Age, and extreme economic inequality allowed Chicago to drop tons of money on fairs while leaving its people on the street.

"With many Americans wondering if sectional conflict had given way to class conflict, American political and economic leaders followed the example of their peers in Europe and turned increasingly to the medium of the world's fair to provide the cultural cement for their badly fragmented societies," Robert W. Rydell writes. Underwritten by industrial titans like J. P. Morgan, Cornelius Vanderbilt, and William Waldorf Astor—who collectively gave $15 million to the fair—as well as major Chicago titans like Cyrus McCormick and Marshall Field, the fair began to come together around 1880.

At the time, women and African Americans fought mostly white male-led committees to ensure they had a place at the fair. At the time, African American artists and inventors were given a separate day to showcase their work, and women were granted a few rooms of their own, so to speak. (It's interesting how much—and how little—has changed).

The Chicago World's Fair occupies an honored position in American memory, but it was a truly gory occasion in many respects. At the end of the fair, the city's beloved mayor was killed in his home. The book Devil in the White City tells the story of America's first serial killer, who tortured and killed up to 200 unsuspecting victims in a castle-like homed before and during the fair. (Admittedly, whether Christopher Columbus and his colonial ilk could be counted among serial killers should be discussed in a different article.)

The Great Fire at the Chicago World's Fair, the destruction of the Manufactures and Liberal Arts Building, 1894lookandlearn.com

Another famous American exposition happened in 1915 in San Francisco. During this fair, which marked the completion of the Panama Canal, visitors were able to witness the first transcontinental phone call. The occasion also officially marked San Francisco's recovery from a devastating earthquake in 1906. The fairs could be healing forces, opportunities to channel decay into forward movement.

In 1939, New York hosted its own World's Fair in Flushing Meadows Park, Queens. Its theme was "The World of Tomorrow." Attractions included a brand new subway line, dozens of massive pavilions, and an Albert Einstein speech about cosmic rays. The fair was conceptualized as a way to lift the city out of the Great Depression, and it eventually collapsed due to the onset of a little conflict known as World War II.

Then in 1964, the fair returned to Flushing Meadows. In keeping with the spirit of the 1960s, the festival's slogan was "Peace Through Understanding."

The 1964 New York fair featured some of the more futuristic architecture ever seen. 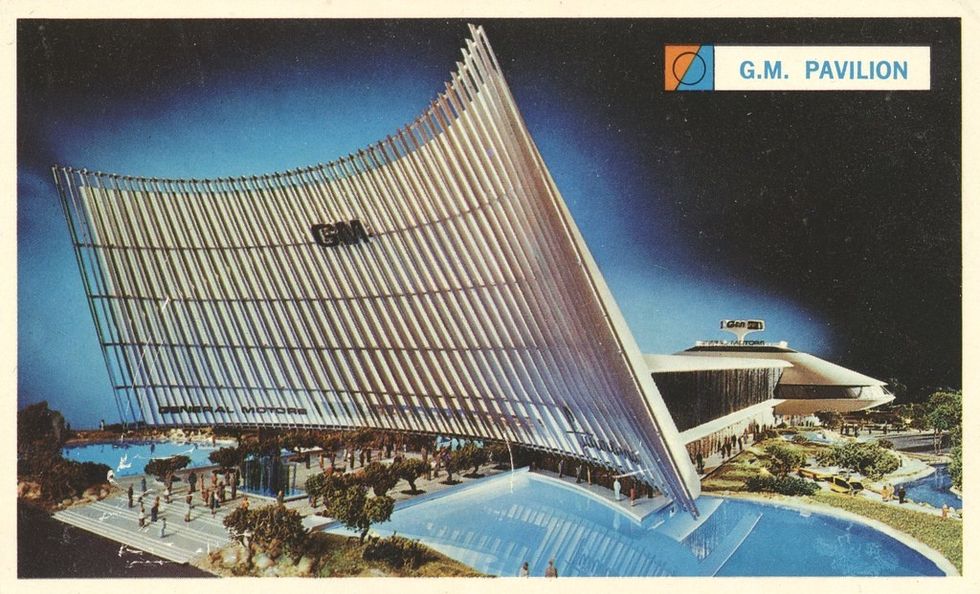 The General Motors Pavilion at the 1964 New York World's FairFlickr

For their first few centuries of existence, world's fairs were typically Western endeavors, but Japan broke this trend in 1970 when they hosted a fair in Osaka. The fair featured hovercrafts, early mobile phone prototypes, and plenty of space-race technology.

The Japan Gas Association Pavilion (which was filled with laughing gas)messynessychic.com

Osaka will actually be hosting the next World Expo in 2025, with the theme "Designing future society for our lives." According to the event description, "Expo 2025 Osaka Kansai will be a place to co-create a sustainable society that can support the aspirations of all through the sharing of new ideas from each participant." Maybe the world's fair is growing alongside the times.

The original world's fairs are never coming back, which is probably for the best. They were emblems to a capitalist dream and an ideal of endless progress, which was usually paid for by colonial efforts in the first place. But they sure look beautiful in the photos.