The Stories of Seven of America’s Most Haunted Bridges

Cross over to the other side.

The Future of Coffee is Melted

How To Survive A Long Trip, From A Serial Procrastinator

12 Black History and Culture Museums and Galleries to Visit 2022

Tis the Summer of Revenge Travel: How to Take Your Dream Vacation … Without Going Broke

As a nation, we're collectively obsessed with haunted bridges.

Though the most famous may be New York's Brooklyn Bridge and San Francisco's Golden Gate, almost every state in America has dozens of haunted bridges. Why do these modes of transportation lurk in so many of our minds? Perhaps it's because bridges often carry us over bodies of water or across great heights, meaning that we have to put our survival in their hands as we ride over them. Although we know consciously that they'll keep us elevated, maybe we can't help but think of what might happen if the boards break and we go crashing into the river below, or if we were to slip and drive over the edge.

Also, bridges are shadow-cloaked and easy places to hide, and so they've often been used as locations for murders or other illicit activities. They're wooden and concrete spectators to hangings, deaths, suicides, and escapes, and are often coated with graffiti and neglect. They're places where the boundary between the human world and the natural one grows thin, and maybe because of this, we can't help but suspect that the boundary between the realm of the living and the dead might grow thin around them too. The old trope of the imp, troll, or ghoul lurking under the bridge might relate to this, as do many of the upcoming legends, which may or may not be grounded in truth—but which certainly reveal truths about our inner paranoias and deepest fears.

This Virginia bridge is shrouded in urban legends, but they all actually stem from a true story. According to a Washington Post report, on October 18, 1970, a couple was sitting in a car near the Colchester Overpass when a man wearing a bunny suit and brandishing a hatchet ran out and threw his weapon into their car window. A week later, a private security guard spotted a man on the porch of a house near the bridge, still clad in the bunny suit. When the guard approached him, the man said, "All you people trespass around here. If you don't get out of here, I'm going to bust you on the head."

The hatchet-wielder was never found, but his threats spawned a multitude of disturbing legends. According to one, the bunny man was an escapee from a nearby lunatic asylum who hid out in the woods and left a trail of gutted bunnies in his wake until one Halloween night, some teenagers ventured out into the forest—and were found gutted just like the bunnies.

The story of Goatman's Bridge begins with an African American entrepreneur named Oscar Washburn, living in the 1930s in Denton, Texas. Washburn became a successful goat farmer and was soon known around town as the "Goatman." When he hung a sign on the nearby bridge that read "This Way to the Goatman," it provoked local Klan members, who stormed Washburn's shack and hanged him on the bridge on one dark night. But when they looked over the bridge, according to legend, Washburn was nowhere to be seen, and the noose was empty. This made the Klansmen even more angry, and they went on to set fire to Washburn's shack, killing his wife and children.

Naturally, the Goatman's bridge is still viewed as haunted by many locals and folklore-lovers. Travelers have reportedly spotted glowing eyes peering through the trees and have caught glimpses of Satyrs and goatlike beasts. Another legend says that before Washburn, another African American man named Jack Kendall was lynched near the bridge and still haunts it today.

Some legends say that the Goatman and his ghostly coterie only spirit away people with the blood of slaveowners or Klansmen in their veins. The bridge (and the legends that surround it) is a reminder that the atrocities of the past cannot be cleansed away with time. "If history is the self-congratulatory narrative of a community written by its victorious elite, then our ghosts will often problematize and haunt such tidy romanticisms of back in the day," writes Shaun Treat of why these kinds of legends and ghosts persist in our minds. Even if there are no real ghosts, America is certainly a deeply haunted land.

This legendary scarlet bridge was built in Pennsylvania before the Civil War, but according to legend, three confederate soldiers were hanged there after deserting the troops during the Battle of Gettysburg. Since then, passersby have recorded cannonball sounds, ambient screams, mysterious fogs rolling through the bridge, and even full-on ghosts dressed in traditional military uniforms. Clearly, the ravages of war can live on long after a peace treaty has been signed, burrowing into DNA and passing along threads of trauma far into the future.

Vermont's Gold Brook Bridge is supposedly haunted by the ghost of a girl named Emily. There are a lot of different legends about how she might've died, most involving some kind of love affair gone wrong. According to one, Emily was supposed to meet her lover on the bridge, but when he failed to appear, she hung herself from the rafters. Another one says that Emily was supposed to marry her groom, but when he didn't arrive at the wedding, she took her family's wagon out to find him. She whipped the horses into such a frenzy that when the time came to make the turn onto the bridge, she failed to do so and the wagon went crashing into the stony river below.

Actually, there aren't any official records of Emily's existence. The legend first officially appeared in the late 1960s, in a story by a high school student who said he'd summoned a ghost named Emily while using an Ouija board on the bridge. Since then, visitors to the bridge have reported contacting a girl named Emily, hearing screams, seeing a girl dressed in white, and hearing the sounds of dragging or splintering.

The star of this eerie fable, Elias Friske, isn't real—but he's such a chilling bogeyman that he may just haunt your dreams anyway.

In the mid-19th century, a bunch of children went missing around Kent County, Michigan, and townspeople requested advice from an elderly man named Elias Friske. The old man told them that the abductions were the work of demons. Later that day, the townspeople left their children in Friske's care while they went to search the woods. When they returned, the townspeople discovered that Friske had killed their children and left their bodies in a nearby river underneath what is now known as Hell's Bridge. He told them that demons made him do it. 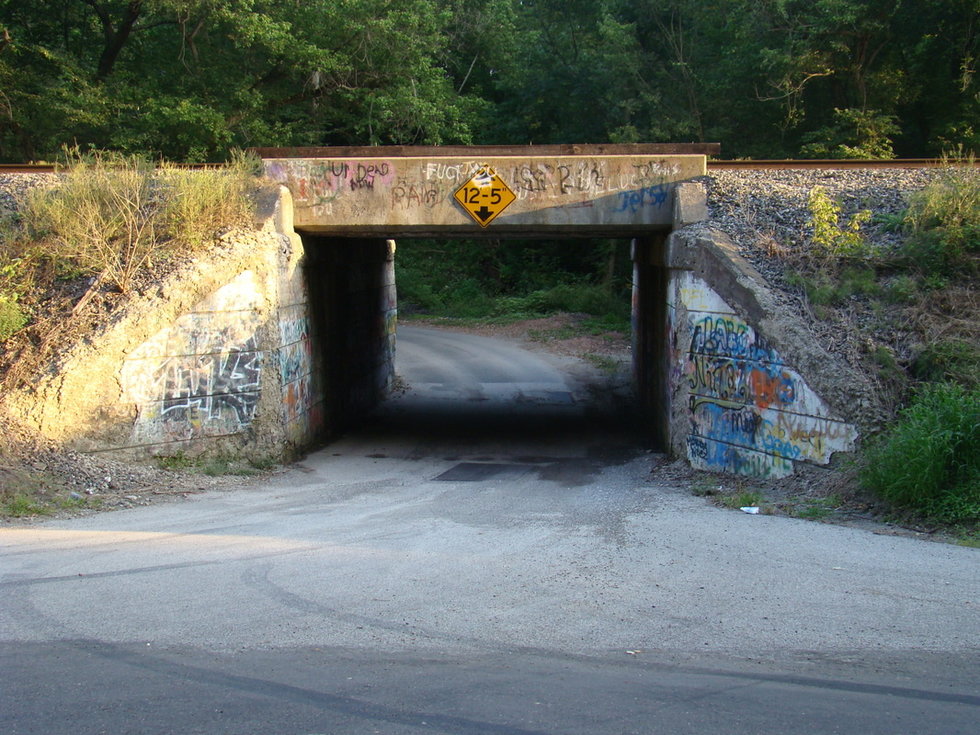 Hunters of the Unknown

Apparently there's a portal to hell in Indiana, by way of Collinsville, Illinois. Legend has it that if you go cross the Seven Gates of Hell Bridge at night, you'll pass through (you guessed it) seven gates, and then you'll reach the door to Hell, where you'll be pursued by hellhounds. Legends say that the bridge is haunted by spirits of devil worshippers who used to use the bridge for their rites.

Though the legend about Indiana's Seven Gates of Hell Bridge doesn't have much basis in fact, there are dozens of bridges across the country that are said to be portals to the fiery realm of the damned. California's Bridge to Nowhere in Azusa is supposed to be a portal to Hell, and New York's Hell Gate is a famously haunted bridge.

If you cross this bridge, be sure that you have a rosary or protective talisman with you. If not, according to legend (and to the advice of some local psychics and tarot readers), the bridge is populated by shadow people who will try to pull you away into the demon realm. Eerily, these shadow people are the ghosts of those who were spirited away before. So be careful, unless you want to spend your afterlife abducting travelers forevermore.

According to one urban legend, a husband and wife were walking unprotected across the bridge when the husband was pulled forcefully away, and he started screaming that the devil had a hold of him. He was able to escape...but he still has the scars.

Once you start looking for it, you'll realize that according to our myths and legends, America is literally riddled with portals to other dimensions.

The Future of Coffee is Melted

How To Survive A Long Trip, From A Serial Procrastinator

12 Black History and Culture Museums and Galleries to Visit 2022

Tis the Summer of Revenge Travel: How to Take Your Dream Vacation … Without Going Broke