Have you ever wondered what it would be like if you were on vacation and the president suddenly banned travel from the country you were in?

Neither had I, until it happened to me and my wife on Wednesday night. We'd been planning a trip to Iceland since last fall, and when the time finally came for us to pack our bags in early March, the coronavirus panic was slowly rising but had yet to reach a boil. The stock market was going crazy, but daily life seemed largely unaffected. We had heard some stories about people raiding supermarkets for certain essentials, but it still seemed like an isolated issue. There was a handful of people going overboard with their preparations, but no real cause for alarm yet, and our trip was only supposed to last a week—how much worse could things really get in one week? Cut to one week later, when things have gotten soooooo much worse. 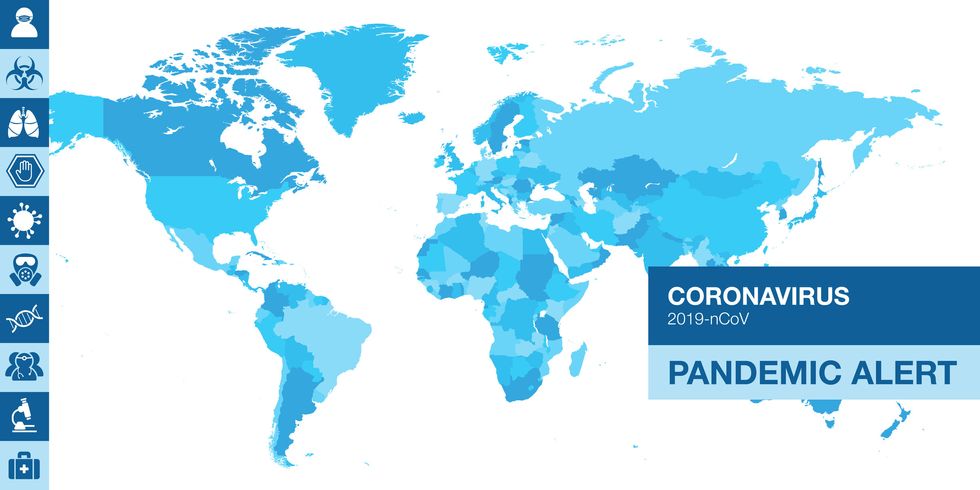 In that one week the WHO officially declared the spread of COVID-19 a pandemic, thousands more cases were confirmed in the US, Italy extended its emergency quarantine directives to the entire country, and the future of the fate of the global economy seemingly bounced around from one moment to the next. My wife and I kept track of all this news as we traveled around Iceland trying to enjoy ourselves. But while all of it was worrying, none of it was all that shocking, and none of it felt like a reason not to enjoy the beautiful scenery, the delicious food, and the glorious hot springs. That changed on Wednesday night.

We were lying in bed in the dark, pretending we could force our bodies to adjust to the time difference but still staring at our phones. A little after 9:00PM EST—past 1:00AM in Iceland—my wife turned to me and said, "Trump just announced a travel ban in Europe." Here's what the president interrupted Sarah Palin rapping on The Masked Singer to announce: His administration was "suspending all travel from Europe to the United States for the next 30 days," but there would also be "exemptions for Americans who have undergone appropriate screenings" and would not include the United Kingdom (or Ireland, though Trump didn't mention that). The ban would take effect "Friday at midnight." He initially said that it would also apply to cargo, though that aspect of the measure has since been redacted.

Was it worth it, Mr. President?

Our return trip was scheduled for Sunday, and we suddenly had no idea if we would be allowed back in the US. We were in the group of people most affected by the announcement, but very little about the situation was clear. These are the questions Trump's announcement left us with: Would Iceland even be included? (While it's generally considered a European country, it's geographically removed from the continent and not a part of the EU.) Would the "exemptions for Americans" include permanent residents or only citizens? (My wife is a Green Card holder.) What kind of screenings would be "appropriate"? And what does Friday at midnight even mean? Would the ban start just before 12:01AM on Saturday, or just after 11:59PM on Thursday? In very few words President Trump managed to create a baffling number of uncertainties, and not just for us.

We quickly decided to look at flight options for Thursday (the only day we knew for certain we would both be allowed back), and already the prices had jumped up to multiple times their usual rate. Several flights had long layovers in the UK—which seemed like a possible loophole—but flights to the US and Canada were prohibitively expensive. By the time we got through to an Icelandair representative to try to change our tickets, all of their flights to the US were fully booked, and it wasn't clear if more would be scheduled. It was looking increasingly likely that we would be stuck in Iceland with little money for the next month—if not much longer. When continued frantic searches seemed to reveal a flight to Boston that was only three times its usual cost, we jumped at the chance and had almost completed the purchase when we finally got some clarification.

The Department of Homeland Security had released the pertinent details that Trump had left out. A few hours into our panic we learned that yes, Iceland would be included in the ban—along with all other countries in the "Schengen Area" of free travel. The ban would not take effect until the end of Friday ("Friday at midnight" apparently meant 12:00AM Saturday), and, most importantly, Green Card holders would be exempted from the ban. A lot of details still had to be worked out, but that seemed like enough information for us to finally go to sleep.

Later on we would find out more about the screening process. Only 13 airports were deemed equipped to screen passengers, which meant that many people had their flights canceled with little hope of getting on a flight to one of those 13 airports anytime soon. Luckily our flight was into New York's JFK airport—one of the 13 approved for screening—so we didn't have to worry about finding a new way home. What was more of a concern on Saturday were the reports of six-hour delays in the screening process.

Chicago's O'Hare seemed particularly swamped, with pictures showing massive crowds waiting to be screened—and potentially sharing pathogens… Again, we were lucky. By Sunday evening when we landed, the Centers for Disease Control seemed to have streamlined the process so that—after a slight delay and a short questionnaire—we were allowed off our plane to be checked by a team of masked and gloved CDC employees armed with laser thermometers…and informed that we were expected to immediately go into a 14-day self-quarantine. Maybe we should have stayed in Iceland… At least the healthcare there is better.