I Saw a Dead Whale's Dick in Iceland, and It Changed My Life

If you're not feeling the whole "America is great" thing, here are some alternative ways to spend your Independence Day.

America has always been the land of the free—unless you're, well, anybody but a white male. Now, even if you are a white male, you're probably either feeling marginalized because everyone hates you for colonizing the world and bringing it to the edge of climate apocalypse or you're fed up with our current leader as he gallivants around North Korea.

No matter who you are, it's quite likely that you're feeling less than optimistic about the state of our nation, and maybe you don't want to cheer while fireworks rain down and the national anthem plays on the 4th of July. If that's the case, here are seven ways to celebrate your own anti-Independence Day. 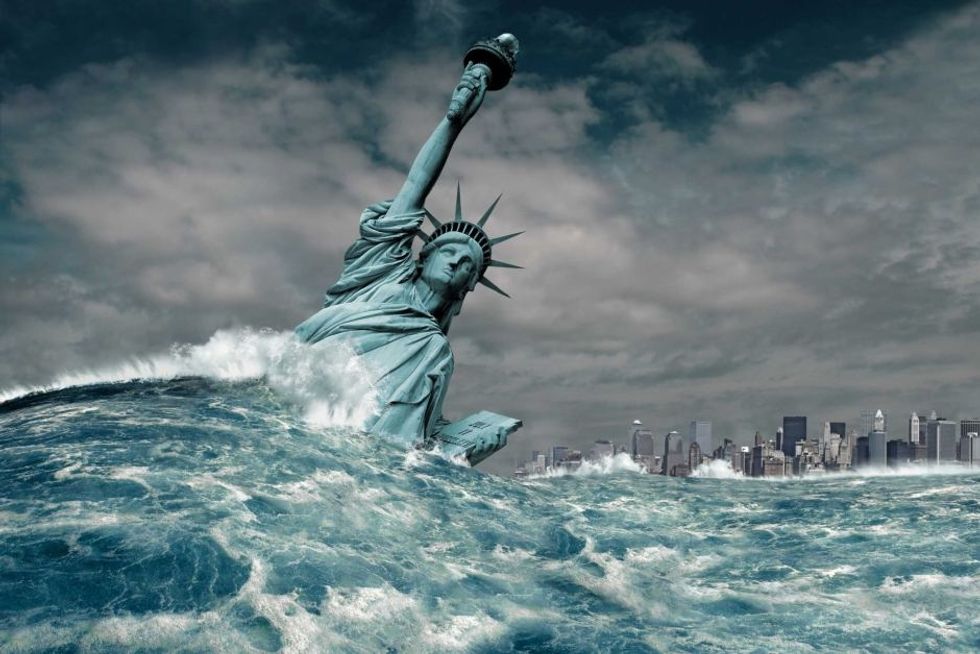 Image via eye of the cyclone

1. Take a summer road trip down to the U.S.-Mexico Border to protest our government's imprisonment of children

What could be better than a road trip to celebrate this great nation, with its expansive network of highways, endless fast food stops, and quirky roadside attractions? This July 4, cue up a fun playlist, fill up the gas tank, and set off on an exciting journey to one of the many "concentration camps" in which the U.S. government is keeping migrants at the border.

You could even live out your On The Road dreams and make a whole cross-country odyssey of it, starting from the Elizabeth Detention Center in New Jersey and making your way to the flu and lice-ridden center in Clint, Texas. From there you can travel along the famous Route 66 to El Barretal, the overflowing abandoned nightclub in Tijuana where huge numbers of people slept without roofs over their heads. Then, you can dip back up to California for a jaunt through the Redwoods, stopping along the way at the many for-profit California ICE facilities that have been holding prisoners for months or years at a time.

After all, what could be more American than separating children from their families and imprisoning non-white people on questionable legal grounds and at disproportionate rates? Tequila shots on Mexico!

2. Have a picnic in Missouri in front of the last remaining Planned Parenthood in the state

The 4th of July is the perfect excuse to take a leisurely journey to Missouri. You can start out with a visit to St. Louis, then spend the afternoon drinking lemonade and watching the sun set in front of the state's only remaining abortion clinic. Though the state ordered it to close, the Planned Parenthood has managed to hang on, securing a stay of proceedings that will allow its doors to remain open until August.

To make the perfect July 4th celebration, be sure to bring an all-American spread of hamburgers, hot dogs, coleslaw, protest signs, and bulletproof vests. You may have to fend off a few angry Evangelicals, but you'll also get to witness women rushing to get abortions while knowing that should this clinic close, come August 24th it will be illegal for them to get abortions after 8 weeks of pregnancy, even in the case of rape or incest. Who needs the separation of church and state, anyway? Obviously both of these organizations have everyone's best interests at heart!

3. Get wasted in one of New York City's many corporatized gay bars, then light some fireworks outside Trump Tower

New York City is the best place to celebrate the true spirit of the land of the free, where everyone is supposed to be able to pursue life, liberty, and happiness (as long as they're a white male). If you visit New York, you might catch the last vestiges of Pride Month before companies take down their rainbow flags for the rest of the year, because obviously gay people only exist in June.

You can celebrate the true spirit of American independence—being able to make as much money as possible even, or especially, if you're profiting off exploitation of marginalized groups—by visiting T. Mobile or Citibank or any of the other corporate bodies that have grown wise to the profit potential of queerness (as long as it fits into a non-disruptive, cisgender construct).

Afterwards, drink away your ennui at one of NYC's many gay bars, which were originally formed as spaces of refuge for queer people but now serve as the perfect destination for straight women to bring their boyfriends or celebrate their girls' nights out.

Once you've downed enough watered-down $17 cocktails and are feeling reckless, take a stroll over to Trump Tower and show your love for our President by doing whatever you, in your drunken state, see fit. If that includes lighting fireworks outside the lobby while screaming at the top of your lungs, go for it. You may spend the rest of your life in prison, but what could be more American than that?!

Did you know that black people are still facing the economic and sociopolitical consequences of that time when white Americans kidnapped and enslaved them? This year, you could celebrate the true hypocrisy of Independence Day by deepening your understanding of this nation's legacy and visiting any black history museum, or reading any Langston Hughes poem.

Independence Day: a poorly thought-out glorification of a country founded on an ethos of colonization and unchecked consumption? Who would've thought? Luckily, all you have to do is turn to a random page in any reasonably accurate history book for proof that America is the product of a long, long series of injustices.

5. Burn a Confederate flag in front of one of America's many statues of Confederate leaders

Did you know that this proud nation still boasts 718 memorials and monuments to the Confederacy? That's right, the same Confederacy that fought to the death so they could continue enslaving the people they kidnapped, tortured, and sold as property still remains immortalized across the country, and many of its monuments are meticulously preserved, courtesy of your tax dollars.

For a fun July 4th adventure, you could steal Confederate flags from Southerners' lawns and burn them in front of the statue of Robert E. Lee in our nation's capital or at any of the 10 U.S. military bases named after Confederate leaders. Or, you could drive along the Jefferson Davis highway, or you could cut to the chase and visit any of the 107 Confederate monuments in Alabama. Of course, modern America doesn't have a racist bone in its body, and these statues are just nostalgic testaments to a bygone era when this nation was great!

6. Visit a Native American reservation to remember that this country was founded on the blood of the people that existed peacefully for thousands of years before European colonizers sailed in and killed them all

Remember when Christopher Columbus, that sociopath who started a genocide and was instrumental in creating slavery, had a federal holiday named after him? Oh wait, that's still true! Columbus Day is Monday, October 14th, and though it's not a day off in all states, it's still a legal observance day in a few states, including that embodiment of American class and excellence, Florida.

If you want to celebrate Columbus's legacy in all its gory reality, you could stop by a Native American reservation—or maybe pay a visit to Standing Rock, where a massive cross-cultural protest failed to stop the installation of the Dakota Access Pipeline. While there, you might take a moment of silence to honor the fact that the U.S. is completely dependent on crude oil and that fossil fuel-funded super PACs essentially run our political elections.

In all seriousness, America isn't the easiest nation to be proud of right now. However, 2020 will mark a time when we the people can actually come together to form a (slightly) more perfect union. Whether that more perfect union will be shaped by Elizabeth Warren's plans, Marianne Williamson's cosmic force field of love, or another four years of Trump tweets is up to us.

This 4th of July, if you're unhappy with the state of America, you could host a presidential candidate speech-viewing party or a climate change discussion group. Just frame the event as a fun picnic with watermelon and fireworks, but when all your conservative neighbors show up, slam 'em with a dramatic reading of AOC's Green New Deal.

As the liquor starts flowing, start collecting signatures for your favorite candidate or political cause. Then host the adults-only after-party at a protest against an ICE raid or another incident of police brutality. Because after all, despite all its flaws, for now America is still a place where everybody has the right to be very, very angry.